Table tennis, also known as ping-pong and whiff-whaff, is a sport

Table tennis, also known as ping-pong and whiff-whaff, is a sport 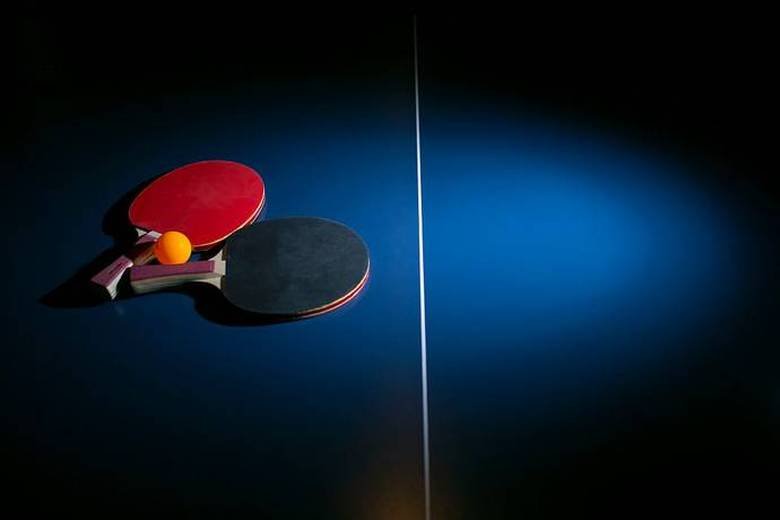 Table tennis, also known as ping-pong and whiff-whaff, is a sport in which two or four players hit a lightweight ball, also known as the ping-pong ball, back and forth across a table using small rackets. The game takes place on a hard table divided by a net. Except for the initial serve, the rules are generally as follows: players must allow a ball played toward them to bounce one time on their side of the table, and must return it so that it bounces on the opposite side at least once. A point is scored when a player fails to return the ball within the rules. Play is fast and demands quick reactions. Spinning the ball alters its trajectory and limits an opponent's options, giving the hitter a great advantage.
Table tennis is governed by the worldwide organization International Table Tennis Federation (ITTF), founded in 1926. ITTF currently includes 226 member associations. The table tennis official rules are specified in the ITTF handbook. Table tennis has been an Olympic sport since 1988, with several event categories. From 1988 until 2004, these were men's singles, women's singles, men's doubles and women's doubles. Since 2008, a team event has been played instead of the doubles.

• Ball: The international rules specify that the game is played with a sphere having a mass of 2.7 grams (0.095 oz) and a diameter of 40 millimetres (1.57 in). The rules say that the ball shall bounce up 24–26 cm (9.4–10.2 in) when dropped from a height of 30.5 cm (12.0 in) onto a standard steel block thereby having a coefficient of restitution of 0.89 to 0.92. Balls are now made of a polymer instead of celluloid as of 2015, colored white or orange, with a matte finish. The choice of ball color is made according to the table color and its surroundings. For example, a white ball is easier to see on a green or blue table than it is on a grey table.
• Table: The table is 2.74 m (9.0 ft) long, 1.525 m (5.0 ft) wide, and 76 cm (2.5 ft) high with any continuous material so long as the table yields a uniform bounce of about 23 cm (9.1 in) when a standard ball is dropped onto it from a height of 30 cm (11.8 in), or about 77%. The table or playing surface is uniformly dark coloured and matte, divided into two halves by a net at 15.25 cm (6.0 in) in height. The ITTF approves only wooden tables or their derivates. Concrete tables with a steel net or a solid concrete partition are sometimes available in outside public spaces, such as parks.
• Racket/Paddle/Bat: Players are equipped with a laminated wooden racket covered with rubber on one or two sides depending on the grip of the player. The ITTF uses the term "racket", though "bat" is common in Britain, and "paddle" in the U.S. and Canada.
The wooden portion of the racket, often referred to as the "blade", commonly features anywhere between one and seven plies of wood, though cork, glass fiber, carbon fiber, aluminum fiber, and Kevlar are sometimes used. According to the ITTF regulations, at least 85% of the blade by thickness shall be of natural wood. Common wood types include balsa, limba, and cypress or "hinoki", which is popular in Japan. The average size of the blade is about 17 centimetres (6.7 in) long and 15 centimetres (5.9 in) wide, although the official restrictions only focus on the flatness and rigidity of the blade itself,
Starting a game:
• According to ITTF rule 2.13.1, the first service is decided by lot, normally a coin toss.
• This is commonly referred to as "serve to play", "rally to serve", "play for serve", or "volley for serve".
Service and return:
• The player serving the ball commences a play.
• The server strikes the ball with the racket on the ball's descent so that it touches first his court and then touches directly the receiver's court without touching the net assembly.
• The ball must remain behind the endline and above the upper surface of the table, known as the playing surface, at all times during the service. Let
A Let is a rally of which the result is not scored, and is called in the following circumstances:
• The ball touches the net in service (service), provided the service is otherwise correct or the ball is obstructed by the player on the receiving side.
Obstruction means a player touches the ball when it is above or traveling towards the playing surface, not having touched the player's court since last being struck by the player.
• When the player on the receiving side is not ready and the service is delivered.
• Player's failure to make a service or a return or to comply with the Laws is due to a disturbance outside the control of the player.
• Play is interrupted by the umpire or assistant umpire.
A let is also called foul service, if the ball hits the server's side of the table, if the ball does not pass further than the edge and if the ball hits the table edge and hits the net.
Scoring
A point is scored by the player for any of several results of the rally:
• The opponent fails to make a correct service or return.
• After making a service or a return, the ball touches anything other than the net assembly before being struck by the opponent.
• The ball passes over the player's court or beyond their end line without touching their court, after being struck by the opponent.
• The opponent obstructs the ball.
• The opponent strikes the ball twice successively. Note that the hand that is holding the racket counts as part of the racket and that making a good return off one's hand or fingers is allowed. It is not a fault if the ball accidentally hits one's hand or fingers and then subsequently hits the racket.
• The opponent strikes the ball with a side of the racket blade whose surface is not covered with rubber.
• The opponent moves the playing surface or touches the net assembly.
• The opponent's free hand touches the playing surface.
• As a receiver under the expedite system, completing 13 returns in a rally.