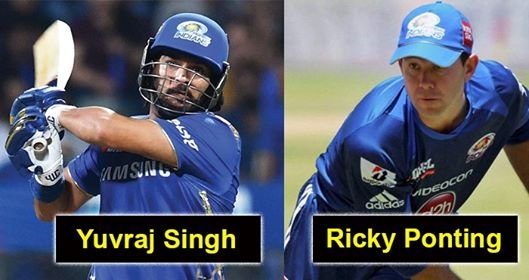 The Indian Premier League (IPL) has witnessed some of the greatest players in the world making their presence felt, with excellent performances through thick and thin.
However, at the same time, there have also been several players whose exploits in international cricket, have failed to translate in the premier tournament. It’s time to now take a look at five high-profile players who have failed to make their presence felt in the IPL: 1.Andrew Flintoff
The English all-rounder was signed by MS Dhoni-led Chennai Super Kings, for US$1,550,000 – $600,000 above his base price of $950,000, in IPL 2009. Flintoff however struggled with restricted appearances, due to injuries.
The Englishman was soon sent back home having scored 62 runs and picked two wickets in 3 games, after a knee injury which spelled the end of his career in the IPL. Flintoff cost the franchise Rs 15 lakhs per run. 2.Yuvraj Singh
India’s swashbuckling all-rounder Yuvraj Singh doesn’t need any introduction. The all-rounder has achieved a lot of success on the international stage for India and has stunning records to his name. He was the main man behind India winning the 2007 T20 World Cup and 2011 World Cup. Since his debut in 2000 against Kenya, Yuvraj smashed 8,701 and 1,177 runs in 304 ODIs and 58 T20Is respectively. The spinner also picked 111 ODI and 28 T20I scalps. However, the celebrated all-rounder failed to live up to the expectations in the IPL as despite getting hefty amounts of money by the franchises, he didn’t produce the desired results.
The all-rounder started his IPL career with Kings XI Punjab (KXIP) and later moved on to represent Pune Warriors, Royal Challengers Bangalore, Delhi Daredevils, Sunrisers Hyderabad, and Mumbai Indians. Yuvraj mustered only 2750 runs in 132 IPL matches with an average of 24.77 and a strike rate of 129.71. He also picked 36 wickets with an average of 29.91 and an economy of 7.43.
3.MS Dhoni
There was an added anticipation to the start of Dhoni's campaign in IPL 2020 because he had not played any professional cricket for over a year and had announced his international retirement a month before the start of the tournament. It ended up being Dhoni's worst season with the bat for Chennai Super Kings (CSK) and the worst overall for his team as well. He scored just 200 runs across 12 innings, the lowest run tally he has ever raked up in an IPL season and his highest score was an unbeaten 47. The lack of a finisher was just one of many things plaguing CSK them as they became the first team to fall out of contention for the playoffs. Runs: 200 @ 25.00

4.Dinesh Karthik Kolkata Knight Riders have shelled INR 7.4 crores on their captain Dinesh Karthik. However, Dinesh Karthik has not justified the price tag by any stretch of the imagination, at least with the bat. The right-handed batsman averages a meagre 9.80 in five matches with 49 runs.
The five matches so far have produced a best of 30. However, Karthik’s captain has not been questionable, considering that the two-time champions are on the fourth position in the points table. However, critics have backed Eoin Morgan to take over as the skipper.
5.Ricky Ponting
Hailed by many as the greatest captain in cricket history, Ricky Ponting played for Mumbai Indians and Kolkata Knight Riders in the IPL. He batted in a total of 9 innings, scoring 91 runs at a dismal average of 1011. Also, his strike rate was just 71.09.