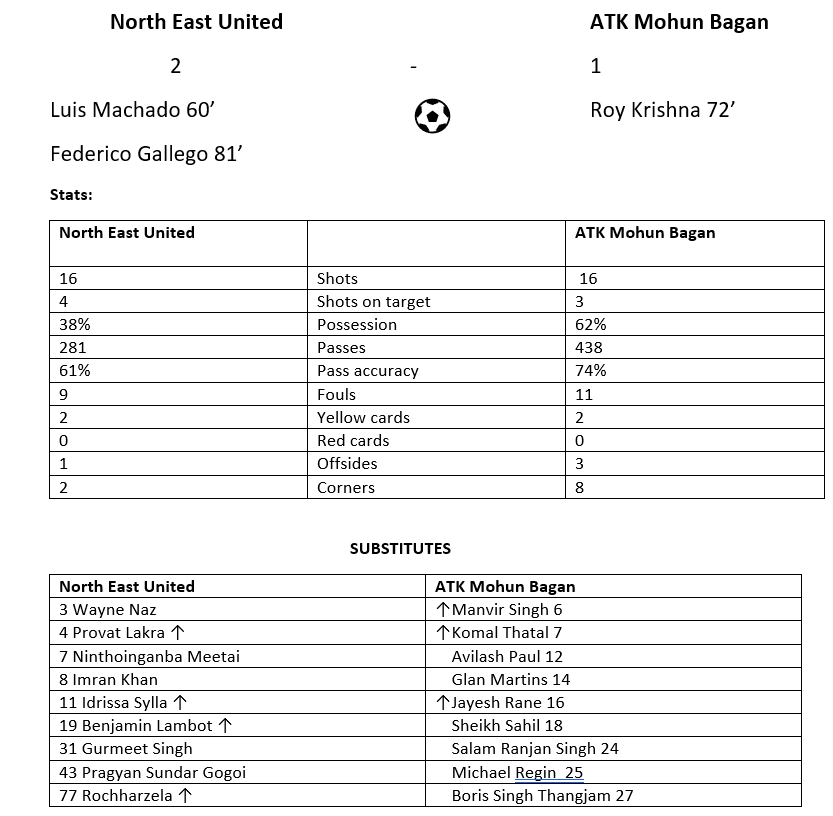 It was Federico Gallego’s 81st-Minute curler that provided an assist to help NorthEast United beat ATK Mohun Bagan 2-1 in Indian Super League match at Fatorda Stadium on Tuesday. Gallego had a part to play in Luis Machado’s opener(60th) before Roy Krishna(72nd) equalized for the Mariners. The first half was a cagey affair, illustrated by the fact that both teams had only one shot on target each at the end of it. Both teams were trying to find their rhythm in first half. Northeast stuck to defending their area and did not have too many completed passes in the opposition half. ATKMB had their first chance in as early as the eighth minute. Krishna found Javi Hernandez through a cut-back but the midfielder's shot was wide. It was ATKMB who kept more of the ball and looked the more threatening throughout the first half, but Northeast did have their chances. Just after the half-hour-mark, Bagan keeper Arindam Bhattacharja was forced to make a save after Machado received the ball from Gallego and took a shot. The Mariners nearly went ahead at the stroke of half time as David Williams, after getting the ball from Hernandez, tried to find the onrushing Prabir Das, who missed it by inches. The opening goal came in controversial circumstances. ATKMB defender Tiri gave away the ball cheaply as it bounced off Gallego and ran loose behind the defence. Tiri found himself in a race with Machado to get to the ball first. The Spaniard, though, took a tumble under pressure from Machado and the linesman's flag went straight up. Referee Crystal John, however, did not stop play and Machado duly slotted it past Arindam. Despite vigorous protests by ATKMB players, John allowed the goal after consulting the linesman. But it was not long before the Kolkota giants got back into the game, thanks to a poaching finish from Roy Krishna, who was left unmarked in the NEUFC box in the 72nd minute. His seventh goal of the season out an end to the Fijian’s recent fall in the strike department. But for a side that boasts of conceding the least number of goals so far, there was misery on the day in the form of Gallego. The midfielder got a pass from substitute Rocchazela in the 81st minute outside the ATK MB box and dislodged a shot that beat the defenders and a crouching Idrissa Sylla and swerved into the far end of the net past a diving ATK MB custodian. NEUFC Interim Head Coach Khalid Jamil After the Match said - "It is because of the players that we got the result. They worked hard and we deserved this victory. "It (the movement of Gallego and Machado) is because of the experience of the players. Gallego is experienced and smart and same with Machado. "Both victories have come because of the players, they have worked very hard. It is a collective effort. "We are thinking about the next game. It's a big game and we are playing one of the biggest teams in the ISL."

Who are the best football players in the world right now? A question that can never be properly answered, will barely even come close to leading to an agreement, but one that continues to fill pub chat and football terraces. To set the criteria for our list, we’ve selected our top 5 players in the world based on personal talent and achievements across the last few of years, as opposed to a short burst of form or one-off blips following a decade of success.

1.Lionel Messi – FC Barcelona
We’ve all seen him play. No one can match his defending skills. No one can create a chance out of nothing the way he does it routinely. He can score great individual goals from open play or set pieces. Or he can engineer a jaw-dropping team goal. Pick your poison. He'll beat you any way he can.
2. Cristiano Ronaldo - Juventus
There is no doubting Ronaldo’s exquisite talent and the Portuguese may well go down in history as the greatest footballer of all time. But in 2021, his wings have been clipped. Ronaldo’s Juventus are labouring in Serie A and Portugal haven’t been at their best. Crucially, Juve bombed out of the 2020 Champions League at the last-16 stage, having fallen at the quarter-finals the year before. In this ranking of the world’s best footballers Ronaldo is slipping. He is still a behemoth of a figure and can dominate the majority of Serie A games without a problem. But his only true value to Juve is in Europe – and this is where the ex-Manchester United superstar needs to deliver.
3. Kevin de Bruyne - Manchester City
Arguably, Kevin de Bruyne is the best footballer in the world right now. Kevin de Bruyne was very unlucky to miss the majority of last season due to an injury. Even this season, the poor defence of Manchester City have resulted in the club's underwhelming performances. De Bruyne is the player who has a major impact on the team. Despite Bernardo Silva's poor form and David Silva not playing every game, de Bruyne has maintained the attacking prowess of Manchester City. City's first loss of the season came in a game (against Norwich City) where De Bruyne did not start. The Belgian has eight goals and 16 assists to his name this season while also averaging 3.7 open play key-passes and 1. 3 tackles per game. Despite Manchester City's rough league run, de Bruyne has been among the front runners for the PFA Player of the Year Award. In perhaps the most important game of the season against Real Madrid, De Bruyne scored and assisted, dishing out four key passes.

4. Robert Lewandowski - Bayern Munich A striker whose talents have adapted to changes in style over the years, Lewandowski is as seasoned a goal scorer as you’ll ever see. The Poland international has a dead-eye for goal in a one-on-one situation and his numbers are hugely impressive. Lewandowski scored 45 professional goals in 2020 – the fourth year in a row he broke through the 40-goal barrier. What’s more, he was named European Footballer of the Year and FIFA’s player of the year, but controversially wasn’t granted the Ballon d’Or in 2020 after the award was cancelled due to COVID-19. 2021 looks set to be another stellar year for the forward, with Bayern flying in the Bundesliga, into the Champions League knockout stages and Poland a strong outside contender to win Euro 2020 in the summer.
5.Neymar – Paris Saint Germain
Neymar didn't have a particularly memorable 2019. Injuries, suspensions, poor form, ongoing transfer rumours, and off-field problems all made for one of the worst years of his career. A rough 12 months aside however, the Brazilian remains an extremely talented footballer, who has the ability to change a game like no other player in world football, bar Lionel Messi. Seductively skillful, a perceptive passer, and first-class finisher — Neymar has it all in his arsenal. At 27, he still has plenty of time to fulfill his potential as the world's best which he showed during his time at Barcelona.