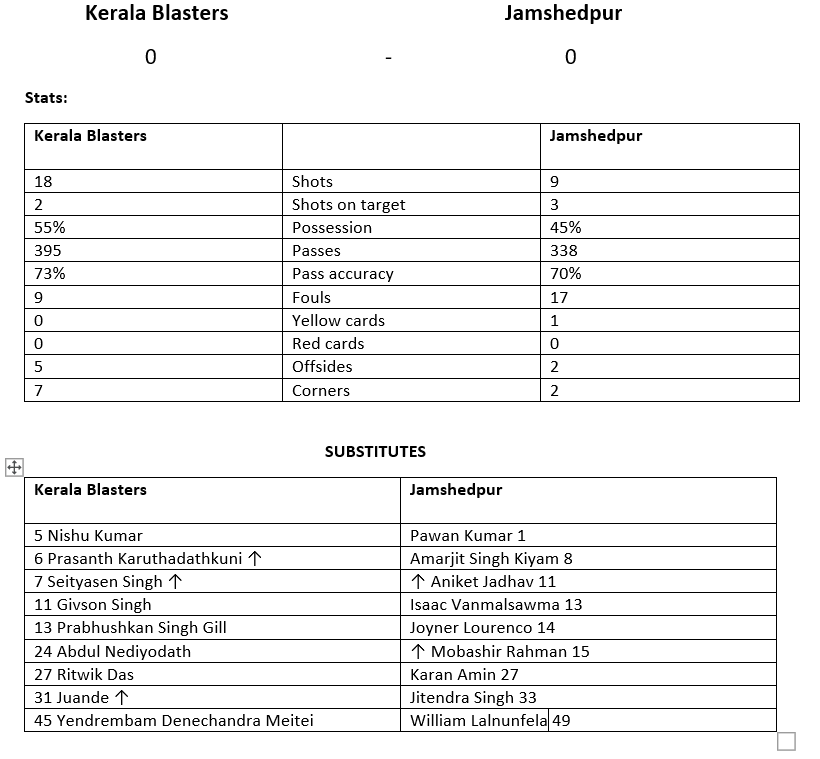 Kerala Blasters FC hit the woodwork thrice, missed a lot of chances, and had to settle for a goalless draw with Jamshedpur FC in the Indian Super League at Bambolim on Wednesday.
Kerala Blasters FC were the superior team overall and created more chances than Jamshedpur FC but lacked the cutting edge in the final third, which denied them their fourth win of the ongoing seventh season of the Indian Super League.
The first half proved to be a pulsating affair but attackers of both sides were guilty of missing chances. Jamshedpur dominated the opening quarter and had the opportunity to take the lead early on, following a blunder from Kerala keeper Albino Gomes. He miscued a clearance, gifting the ball straight to Nerijus Valskis. The striker popped a shot at goal but Albino recovered well in time by managing a finger-tip save, which kissed the far-post before going out.
Valskis missed another gilt-edged chance in the 30th minute, after some lovely build-up play from Jamshedpur. Aitor Monroy found the Lithuanian in the box with a delightful lob, but Valskis fluffed his chance as he attempted an acrobatic volley.
“We created enough chances, and we should have converted them. We have to blame ourselves. We should have taken our chances and we should have scored. This is why we feel like we should have the three points," Ishfaq said at the post-match press conference.

On the touchline, it's always frustrating when you see your team playing according to the plan and then creating those opportunities and not scoring," said Ishfaq.
"All we can do is keep encouraging the players and hope that they score. We will not blame the players, it was just not our day," he added. Ishfaq went on to praise the star of the match, Sahal Abdul Samad, and admitted that the side missed the services of Rahul KP and Jeakson Singh. “Sahal is a fantastic player for us. He has brought in a defensive aspect to his game by tracking back and helping the defence. We are very pleased with him," he said.

"If they (Rahul, Jeakson) are good players we will definitely miss them. We have been working on the training ground not to give away easy goals. We have been doing well in defence recently," he added.
Kerala Blasters will face ATK Mohun Bagan in their next encounter on Sunday.