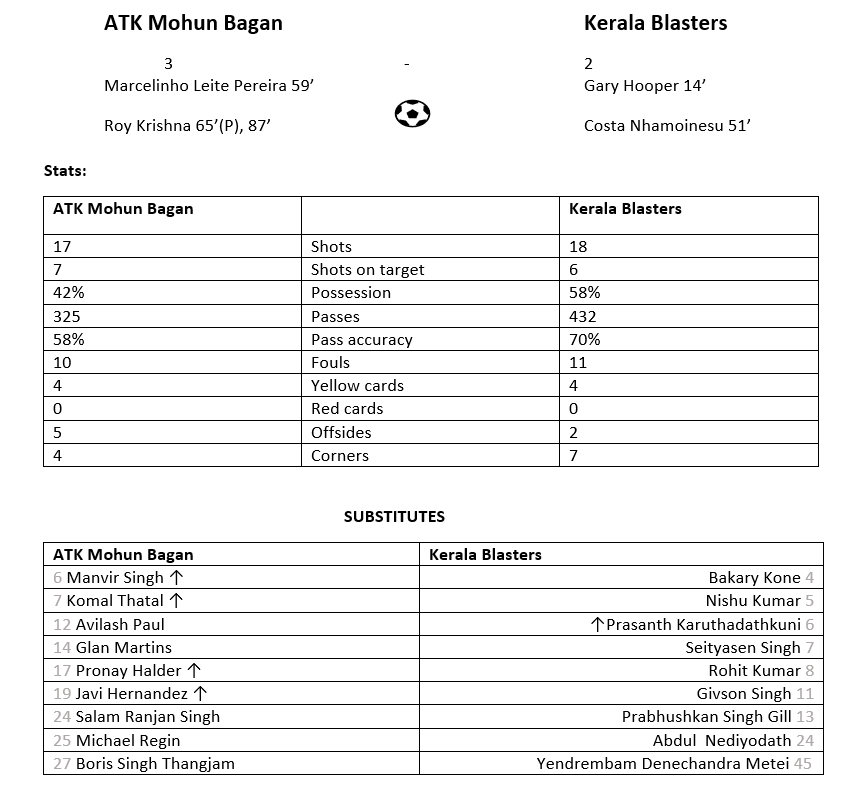 ATK Mohun Bagan are among the few teams in the Indian Super League who can win matches from hopeless situations as demonstrated in their 3-2 win against Kerala Blasters at the Fatorda Stadium in Margao on Sunday.
Trailing 2-0, they scored three goals in the second half to secure a win that has helped them trim the gap to Mumbai City to just three points with the race for the ISL shield back on.
Kerala Blasters led through goals from Gary Hooper (14th) and Costa Nhamoinesu (51th) before a goal from Marcelinho (59th) and a brace from Krishna (65th, 87th) helped Bagan complete a thrilling comeback.
Marcelinho, having joined Bagan on loan from Odisha, was struggling for game time at his former club. But on Sunday he looked a man transformed, adding spark to the Mariners’ struggling attack, thriving in a free role up front. The first half belonged to Blasters, who not only dominated possession but also created multiple chances.
Kerala Blasters made its attacking intention clear right away and almost went ahead in the fifth minute. Tiri’s headed back-pass was too weak and Jordan Murray latched on to it before squaring it for Sahal Abdul Samad. The youngster played it to Gary Hooper, who returned it to Sahal as neither of them seemed willing to shoot. By the time Sahal did manage to pull the trigger, Jhingan threw his body on the line to block the shot.
It was a sign of things to come for the Blasters as it went ahead in the 14th minute courtesy of a sensational strike goal from Hooper. Sandeep Singh played a lob from the right flank and Hooper chested it down expertly before unleashing a phenomenal volley from 31-meters out.
Arindam Bhattacharja, who is second in the race for the Golden Glove, had no chance as the ball sailed past him and into the top corner. Murray nearly emulated Hooper with a similar strike seven minutes later, but couldn’t keep his shot on target.
The pressure evidently getting to the KBFC’s defence as two sloppy backpasses, one from Sandeep and the other from Costa, nearly gifted the opposition a third goal.

KBFC Head Coach Kibu Vicuna After the Game said: "I am very frustrated because I feel it's not good to be good. I never blame the referees but in the last few games, they haven't been good with us. "We are going to fight every game. We played a very good first half but in the second half, they were better.
ATK Mohun Bagan is a very good team. But the refereeing also hurt us. There were decisions in the first half.
Then they get a penalty in the second half. Congratulations to ATK Mohun Bagan for getting the win but I am very upset."
Hero of the Match Roy Krishna After the Game: "Very tired but we showed character. We came back in the last minutes of the game. Credit to everyone, we got the three points today. "He is a very intelligent player. It's good to play with him, we need to play around him.
"We came and got wins in the last second in other games also. We played really well in the second half today and that is what matters."