Rohit Sharma's Unbeaten Fifty Takes India To 99/3 At Stumps • India vs England Test Highlights: Despite the departure of Virat Kohli, India have put themselves in a good position on Day 1 of the 3rd Test match at the Narendra Modi Stadium in Ahmedabad. In response to England's first innings score of 112 runs, India have put themselves in a strong position on Day 1 of the 3rd Test match, at the Narendra Modi Stadium in Ahmedabad. Despite losing three wickets, the hosts are gaining momentum and are 99 for three at Stumps, after 33 overs. Rohit Sharma, is currently unbeaten with Ajinkya Rahane, and the duo will be aiming to build a partnership on Day 3. Earlier, Rohit built a strong partnership with Virat Kohli, but the Indian captain was dismissed by Jack Leach. Also, Rohit has registered a half-century, and will be aiming for a ton. Other than Kohli, Leach also took the wicket of Cheteshwar Pujara. Meanwhile, Jofra Archer dismissed Shubman Gill. England initially won the toss, and were bowled out in 48.4 overs. Axar Patel was in top form for the home side, registering six wickets. He dismissed Zak Crawley, Jonny Bairstow, Ben Stokes, Ben Foakes, Archer and Stuart Broad. Meanwhile, Ravichandran Ashwin registered the dismissals of Ollie Pope, Joe Root and Leach. Ishant Sharma, who is also in his 100th Test match, registered the wicket of Dom Sibley. The series is finely poised at 1-1, and this is also the first international match in this venue since its renovation. This is also the second Day-Night Test held in India. The visitors will be aiming to register some quick wickets on Day 3, and the hosts will be hoping to take an early lead.

India vs England: Virat Kohli was batting when he had to step away to avoid a pitch invader on Day 1 of the 3rd Test against England.

Highlights
• A fan ran onto the pitch during the 3rd Test between India and England
• Virat Kohli had to step away to avoid the pitch invader
• The fan eventually turned around and went back to the stands
A fan on Wednesday breached the bio-bubble and security protocol on day one of the ongoing third Test between India and England at the Narendra Modi Stadium in Ahmedabad as he entered the field of play to meet India captain Virat Kohli. However, Kohli was quick to spot him from far away and he immediately took a few steps back, asking the fan to return. On realising his mistake, the fan turned back and seeing that the entire crowd started cheering.
As part of the bio-bubble protocols, there is a high amount of strictness and the players and match officials are not allowed to meet anybody. Even, the training sessions before the match are held with every precaution taken care of. 50 per cent crowd has been allowed in the ongoing pink-ball Test at the Narendra Modi Stadium.
When ANI contacted a GCA official about the fan breaching the protocols, he replied: "We will look into the matter and we will find out who the fan was. Some sort of action we will take as the matter is serious and safety of everyone is of utmost importance." 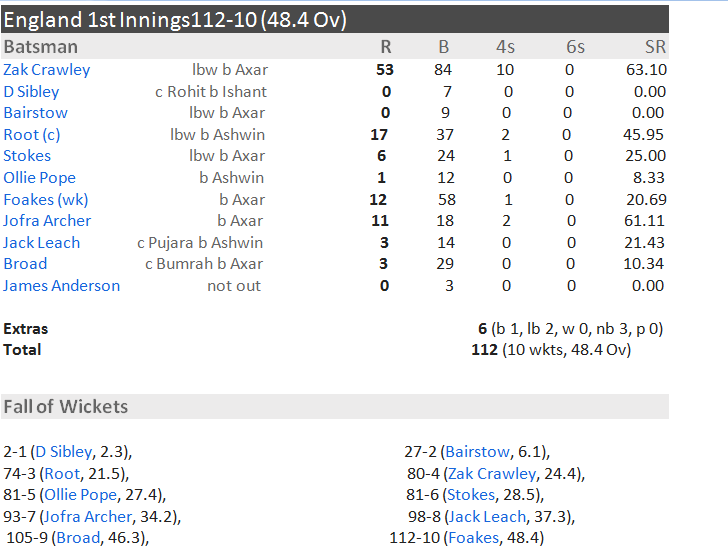 It was very clever': Swann lauds Kohli's field placements to spin bowling
It is always a pleasure for a former spin bowler to look at other spinners do well, even if they are from the opposition team. England spin great Graeme Swann, who is part of the commentary panel for the ongoing Test series between India and England was all praise for Indian spin duo of Axar Patel and Ravichandran Ashwin, after the two men spun the visitors out for 112 in the first innings of the third Test match at the Narendra Modi stadium in Ahmedabad on Wednesday.
Swann, who lauded the India spinners, was equally appreciative of captain Virat Kohli's field setting when the tweakers were bowling. He said the field placements around the bat and in the deep were very clever and that's what didn't allow England to get any runs whatsoever.
India vs England 3rd Test, Day 2 - Live Score and Updates
"Virat Kohli set very good fields. They had men in the outfield and also put a lot of pressure around the bat. They had deep men posted as well to tell to England 'if you are going to tee off, you will get caught in the deep'. 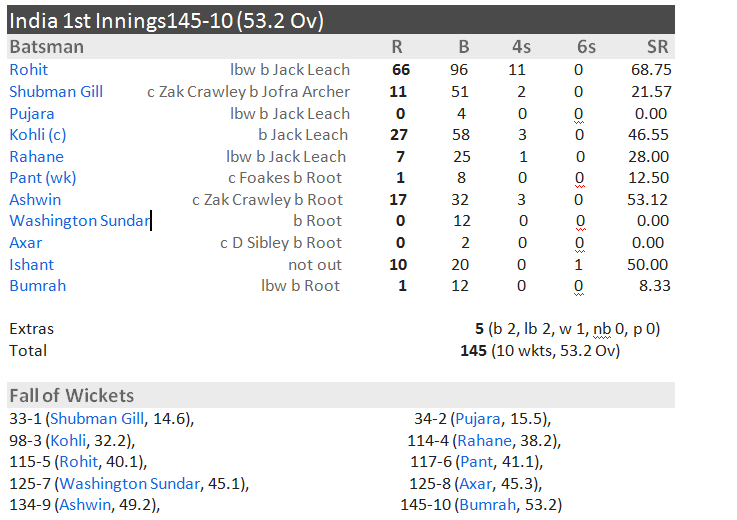 NEWS
India's perfect day
England began Day 1 of the Ahmedabad Test against India by winning the toss. However, for the rest of the day, it turned out to be a chastening experience for the tourists who were rolled over for 112. The home side then took a vice-like grip on proceedings by finishing on 99 for 3 at stumps.
After snuffing England out for a cheap score, India rammed home the advantage on the back of a 64-run stand between Virat Kohli and Rohit Sharma. The duo joined forces after India lost a couple of early wickets. 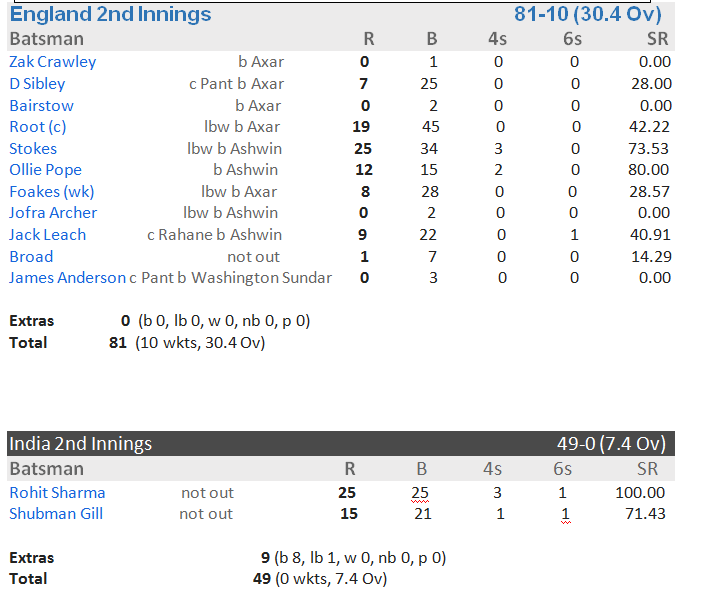 NEWS
Thumping win!
Out of 30 wickets that fell through the course of two days in Ahmedabad, 28 went to spinners, as the D/N Test between India and England in under six full sessions, with the hosts chasing down the target of 49 without any loss. The clatter of wickets on Day 2 exemplified the tough conditions on display for the batsmen. One batsman after another had to negotiate conditions where a few exploded off the surface, which in turn sowed the seeds of doubt. Eventually, most of the batsmen were done in by the straighter-one. After Joe Root and Jack Leach had stunned the Indian batting line-up by snuffing out the side for just 145, Ravi Ashwin and Axar Patel made lightwork of England, dismissing them cheaply in just one session.