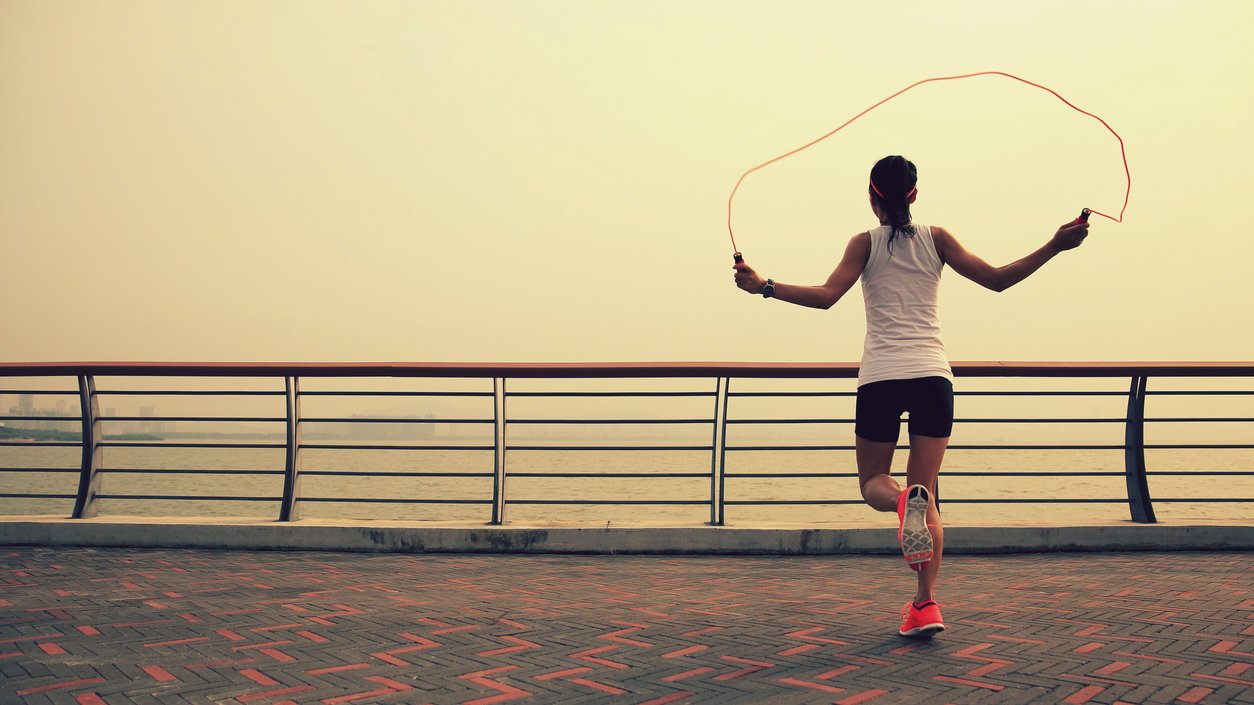 A skipping rope or jump rope is a tool used in the sport of skipping/jumping rope where one or more participants jump over a rope swung so that it passes under their feet and over their heads.
There are a few major organizations that support jump rope as a sport. Often separated by sex, and age, events include hundreds of competitive teams all around the world.
Techniques
There are many techniques used in skipping and they are as follows:
1. Solo participants: In solo jumping participants’ jumps and swings over the rope under their feet. The timing of the swing matched to the jump. This makes it harder to jump rope and establishes a rhythm.
2. Basic jump or easy jump: Jump with both the feet is slightly apart over the rope. Beginners usually master this technique, first before moving onto more advanced techniques.
3. Alternate foot jump(speed jump) : use alternate feet to jump off the ground. This technique can be used to effectively double the number of jumps per minute as compared to the above technique. This step can be used for speed events.
4. Criss cross: Also known as cross over or cross arms. Perform the basic jump whilst crossing the arms in front of the body. 5. Side swing: The rope is passed by the side of the participant’s body without jumping it.
6. EB (Front backcross or sailor): Perform the criss cross whilst crossing one arm behind the back.
7. Double under: A high basic jump, turning the rope twice under the feet. Turning the rope three times is called triple under. In competitions, participants may attempt quadruple (quads) and quintuple (quins) under the same method.
8. Boxer jump rope: One foot is positioned slightly forward and one foot slightly back. The person positions their bodyweight primarily over their front foot, with the back foot acting as a stabiliser. From this stance the person jumps up several times (often 2-3 times), before switching their stance so the front foot becomes the back foot and the back foot becomes the front foot. And so forth.
9. Toad: Perform the criss-cross with one arm crossing under the opposite leg from the inside.
10. Leg over/ Crougar: A basic jump with one arm hooked under the adjacent leg.

11. Awesome Annie: Also known as Awesome Anna or swish. Alternates between a leg over and a toad without a jump in between.
12. Inverse toad: Perform the toad whilst one arm crosses the adjacent leg from the outside.
13. Elephant: A cross between the inverse toad and the toad, with both arms crossing under one leg.
14. Frog or donkey kick: The participant does a handstand, returns to their feet and turns the rope under them. A more advanced version turns the rope during the return to the ground.
15. TJ: A triple-under where the first 'jump' is a side swing, middle jump is a toad, and the final jump in an open.
Benefits of jumping rope:
There are multiple health benefits of jumping rope from losing weight to reducing the chances of cancer. Skipping rope is a great calorie burner and improves the cardiovascular system.
1. Improves heart health.
2. Increases concentration.
3. Improves co ordination.
4. Increases stamina and gets rid of fatigue.
5. Increase flexibility.
6. Boost mental health.
7. Decreases belly fat.
8. Strengthening your bones.
9. Glows your skin.
10. Improve pulmonary function.
Precautions while jumping rope:
1. Warm up at least 10 minutes before jumping rope.
2. Wear shock absorbent socks to avoid injury.
3. Drink electrolyte water before and after exercise.
4. Wear sportswear to support your chest during exercise.