Unlike many others, he admitted his guilt in the global soccer corruption scandal and was awaiting sentencing. 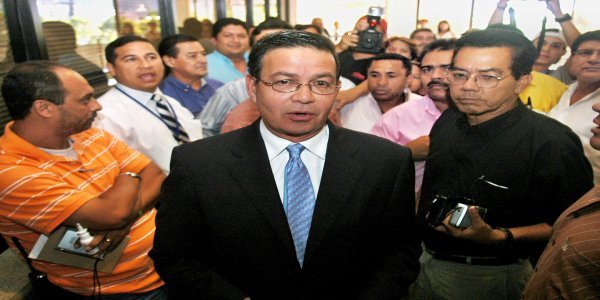 Rafael Callejas, a former president of Honduras who was ensnared in an international soccer scandal and convicted in the United States of taking bribes while president of his nation’s soccer federation, died on April 4 in Atlanta. He was 76. The cause was complications of acute myeloid leukemia, his lawyer, Manuel J. Retureta, said. He had been living in Atlanta while awaiting sentencing and being treated for his illness, Mr. Retureta said. Mr. Callejas, a member of Honduras’s conservative National Party, served as the nation’s president from 1990 to 1994, a time of pronounced economic difficulty in Central America. He was the first opposition candidate in Honduras to take power through a peaceful vote in 57 years. He later spent more than a dozen years leading the Honduran soccer federation, known as Fenafuth. He stepped down in 2015, when the U.S. Justice Department announced a sweeping corruption case focused on soccer officials and sports marketing executives around the world. Mr. Callejas was charged along with dozens of other men, including his top deputy at Fenafuth. At the time of his indictment, Mr. Callejas belonged to the television and marketing committee of FIFA, soccer’s international governing body, which is headquartered in Switzerland. Unlike numerous defendants in the case who for years never answered the corruption charges against them — with some men dying in their home countries while fighting extradition to the United States — Mr. Callejas surrendered to authorities soon after he was charged. He pleaded guilty roughly three months later. “I abused my position of trust and authority,” he said in Federal District Court in Brooklyn in March 2016, pleading guilty to wire fraud conspiracy and racketeering conspiracy, each of which carried up to 20 years in prison. He was the 16th defendant convicted in the case, which was still active at the time of his death. Mr. Callejas admitted he had solicited and accepted bribes from businessmen seeking media and marketing rights to matches played by the Honduran national team. He said he had paid much of that bribe money to delegates of his country’s soccer federation to ensure his re-election. While he noted that he had been outside the United States while engaging in the illegal activity, he acknowledged that American banks had been central to the schemes — a key element in the Justice Department’s case.In December 2016, FIFA banned Mr. Callejas from working in organized soccer. As part of his guilty plea, Mr. Callejas agreed to forfeit $650,000 to the United States. His long-deferred sentencing was scheduled for May 11. Rafael Leonardo Callejas Romero was born on Nov. 14, 1943, in Tegucigalpa, Honduras, to Rafael Callejas Valentine and Emma Romero Sevilla. He studied agricultural economics at the University of Mississippi, where he earned a Bachelor of Science degree in 1965 and master’s degree with a thesis on hog production opportunities in the state. He went on to serve in an array of government positions in Honduras, including minister of agriculture and natural resources. Survivors include his wife, Norma Regina Gaborit de Callejas; five children, Rafael Leonardo, Lastenia, Adriana, Alberto and Irene; 14 grandchildren; and three sisters, Emelisa, Cecilia and Lidia Carolina.Mr. Callejas ran for president in 1985 and though he received a plurality of the vote, he conceded to the leading candidate from Honduras’ Liberal Party because multiple members of it had won a greater number of votes combined. Four years later, Mr. Callejas narrowly won the election outright.When he took office, Honduras had enormous foreign debt, and its neighbors, El Salvador and Nicaragua, were engaged in civil wars. “In this violent Central America, where the youth of our neighbors is spilling its blood, the people of Honduras have given a Yes to peace and a No to blood,” Mr. Callejas said at an election victory party. Vice President Dan Quayle attended his inauguration in 1990, and President George H.W. Bush called Mr. Callejas “a longtime friend of the United States” in a joint appearance at the White House that year. Unrelated to his work in international soccer and well before the American case against him, Mr. Callejas was accused in Honduras of misappropriating government funds. He was acquitted of those charges.