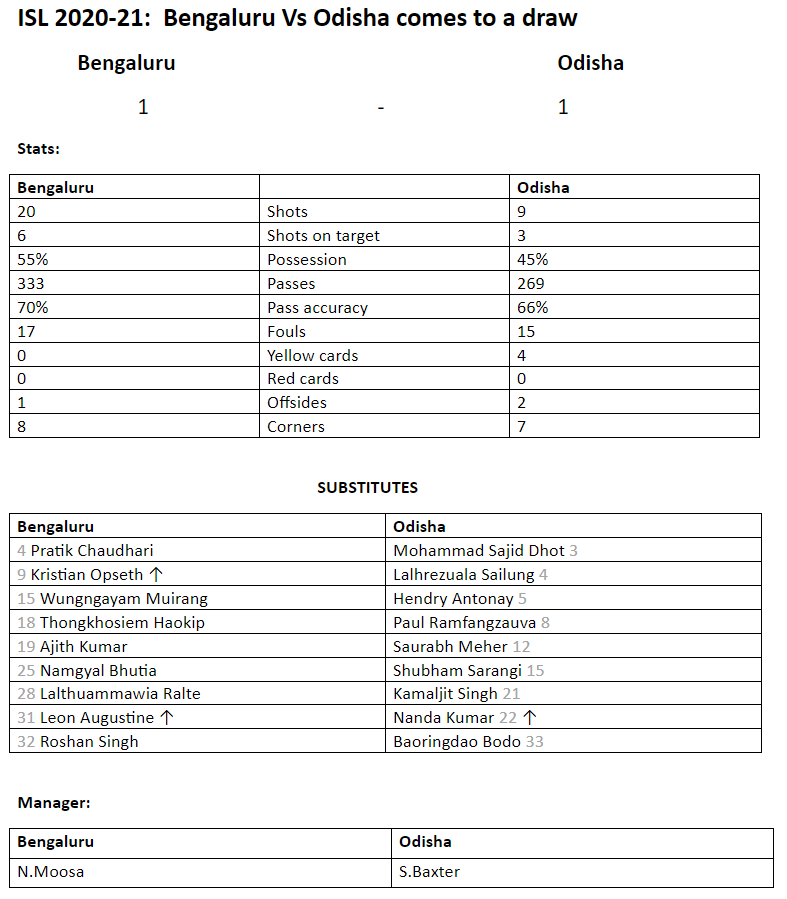 I guess we should have won the game. Towards the end, we created scoring opportunities. What I see is that most of the goalkeepers are excellent against us. We are creating so many scoring opportunities. We are moving the ball well. We are creative. We have to be more compact defensively. We are giving away easy scoring opportunities for the opponent." Odisha FC coach Start Baxter said:"Both teams did not perform to their full ability. I don't think Bengaluru FC played as well as they wanted to and neither did we. We had a couple of chances when we counter pressed and from 1v1s and they had chances from sett plays. The 1-1 is logical result. The way it turned out, we were so close to a result and are disappointed with the draw. Winning will give us the confidence, the draws won't. When they score from a set piece at the end, you get angry and not confidence. I think we got to have a good strong result. We've played better than tonight and lost." Bengaluru had a lot of chances towards the death but failed to capitalise as its winless run now extends to seven games.


Chennaiyin FC and Mumbai City FC will be having match 71 of the ongoing Indian Super League season at the GMC Athletic Stadium in Bambolim today. Mumbai City team has been unbeatable in its last 11 matches in ISL. Predicted team line-up: Chennaiyin FC predicted XI (4-2-3-1) Vishal Kaith; Reagan Singh, Enes Sipovic, Eli Sabia, Jerry Lalrinzuala; Edwin Vanspaul, Memo Moura; Rahim Ali, Jakub Sylvestr, Lallianzuala Chhangte; Esmael Goncalves Mumbai City FC predicted XI (4-2-3-1) Amrinder Singh; Amey Ranawade, Mourtada Fall, Hernan Santana, Mandar Rao Dessai; Ahmed Jahouh, Rowllin Borges; Raynier Fernandes, Hugo Boumous, Bipin Singh; Adam le Fondre. The match will go live today 7:30 PM Onwards. There is a lot of pressure on Chennaiyin FC due to its misfiring attack. Even after 13 matches, sixth -placed Chennaiyin have scored just 10 goals – least by any team. Mumbai’s team strong defence is another big threat to Chennaiyin team. Coach of the Chennaiyin team Csaba Laszlo commented: "They (the forwards) are asked to score whenever there's a possibility, that's one of the main points. We have been unlucky in many cases where we created chances and have missed." "I can't teach them how to create chances but in the last moment, you must be there to put the ball into the net. And today's game is the same. I'm sure we will get chances to use them. But (we need) more attention, instinct and be hungry for goals." Mumbai City won 2-1 in the previous meeting between the two sides but it was Chennaiyin who dominated the game and had better chances. "We have to try to break them down. We have our tactical plans which we did in the first game. We were nearly successful but we were unlucky (to lose the game)," Laszlo said. Mumbai City are five points clear at the top. Coach Sergio Lobera is content with his side's position but knows things can turn around quickly. "I was working every day with the City Football Group and Mumbai City, trying to build a winning team with players suited to our style of play," he said. "I am happy because we are in a good position but the most important thing is the end of the season. We are on top of the table but everything is possible in seven days. You have 3 games in 10 days and you can lose points. We have to keep working the same way."