The cricket champion Don Bradman birthday today he is greatest cricketer in the world. This great Australian batsman was born on 27 August 1908. Bradman's career Test batting average of 99.94 has been cited as the greatest achievement by any sportsman in any major sport. Today is the 112th birthday of Sir Don Bradman, the greatest batsman in cricket history. The former Australian veteran completed his century in just three overs, playing an explosive innings in 1931, in this innings, a total of 14 sixes were struck off Bradman's bat. There were 29 fours in the innings. Bradman scored 256 runs in this match. The second best average, among those who have played a minimum of 25 Test Matches, is 62.84 by Steve Smith in 73 Test Matches. He had 29 centuries in 52 Tests, and in eighty Test innings. Bradman was equally prolific in first class cricket, running up 117 centuries in 338 innings in 234 matches, a century every second match and every third innings or so again! No one even comes close to that 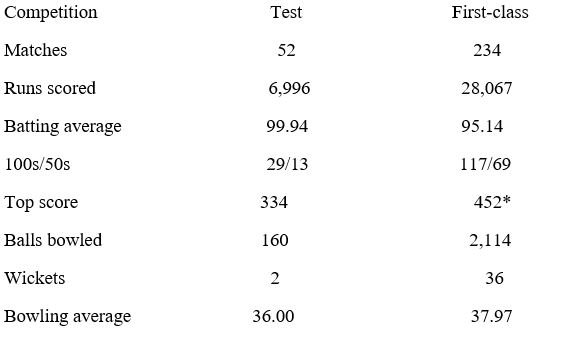 Bradman, who played a total of 52 Test matches for Australia, scored a total of 6999 runs in 80 innings at an extra average of 99.94. Bradman has 29 centuries and 13 half-centuries to his name. During this, he scored two triple centuries, he was the first cricketer in the world to do so.